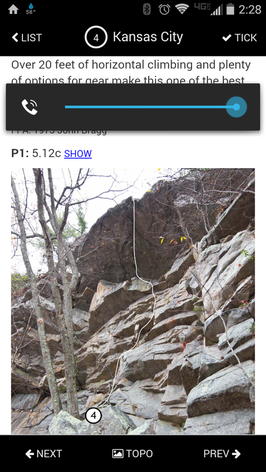 Screenshot of Nears App
Gunks Apps
First there was the Trapps App, then came the Nears App and, coming this spring, there will be two new apps- the Peter’s Kill Bouldering App and the Peter’s Kill Climbing App.
Bouldering App
The Gunks Apps team of Christian Fracchia, Andy Salo, and Byron Igoe will be taking information gleaned by local boulders and putting into app format.
“We have the Peter’s Kill Bouldering App, we’re working on it with the Bouldering Collective- Hillary Guzik, Paul Jung, Tim Keenan, Andy Salo, and Aleks Shineleva. They are putting together all the info for the bouldering section, it should be out in the spring of 2016,” Fracchia said.
“It’s myself and a bunch of friends who decided we should document what’s going on with bouldering in the Gunks,” Salo said about the collective.
The Gunks is primarily known as a trad climbing mecca, not so much for its bouldering.
“The prevailing attitude is that it’s a side show,” Salo said about bouldering in the Gunks.
Salo addresses the old saying ‘Bouldering in the Gunks is like masturbating in a whore house’ saying-
"Bouldering helps in developing technics and skills without the encumbrances of trad climbing". People have been bouldering in the Gunks since the late 1950s, Salo explained.
The easiest boulder problems start at V-0 which is basically equal to a 5.9 climb.  As Salo explains it, a V-4 boulder problem will have some 5.12 moves in it.
“A lot of old time climbers like Rich Ramono and Rich Goldstone credit their success to bouldering,” Salo said.
Will bouldering in the Gunks may be the next big thing?
The Bouldering Collective is working their way through areas of the Gunks; Peter’s Kill is mostly done.
“Peter’s Kill lends itself to easy navigation. There is a high concentration of boulders and all the problems are 5-10 minutes from the parking lot,” Salo said.
The bouldering app will have some similarities with Gunks App’s Trapps App and Nears App, and some differences.

“We will take info we have and dump it into Christian’s App. The look will be similar, but the lay out will be different. We will have an overview map. It’s easier to locate a boulder problem than a climbing route. We will stick with the four star rating. There will be some kind of protection rating but it isn’t ironed out yet. Maybe a skull and cross bones based on a combo of height and what’s on the ground or lichen on the route,” Salo said.
The Collective will include history and first accents in the app. A man named Bob Van Bell climbed a lot of the Peter’s Kill boulder problems in the late 1980’s when the area was closed to climbing. Many people thought they were doing first accents and they weren’t because Van Bell had already been there, Salo explained. So the App includes the common names and AKA from first accents.
The app will also include a color-coded map so that users can take a quick look at an area and see where the easier and harder problems are.

Peter’s Kill App
Beta for the Peter’s Kill Climbing App will provide by Marty Molitoris and Mike Rowdan, whose print book “A Climber’s Guide to the Peter’s Kill Climbing Area” hit book shelves just before Halloween.
The Gunks Apps team of Fracchia, Salo, and Igoe will be taking the content Molitoris and Rowdan used in the book and formatting it into the app.
“We’re working with Marty and Mike and the info they put together – basically taking their content and putting into the app,” Fraccia said.
It will function much like the other two climbing apps.
The team is also working on putting out a print book for the Nears and Trapps. Andy Salo and Eric Ratkowski will be handling the layout and editing. There is really no time frame for this publication, maybe a year out.
“It’s a pretty monstrous project, they want to do it right and do it well,” Fracchia said.

Trapps App
Work continues on the Trapps App.
“We’re adding new lines, making corrections, adding in the new bolted anchors, and there are changes within the app itself. In a topo photo you can click on it and go to the next topo photo without going back,” Fracchia said. “There will be other small things that are making it more user friendly”. 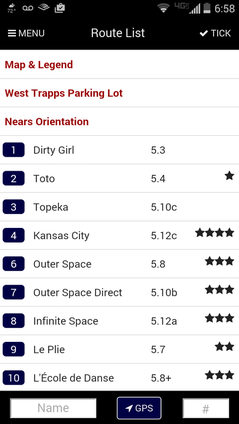 Nears App
The app for climbs in the Near Trapps launched earlier in the fall.
“The Near Trapps are kind of interesting, people only climb 95 percent of it,” Fracchia said.  “The first section is the best rock.  We only covered routes down to Yum Yum Yab Yum, the app is very complete up to Grease Gun Grove, including some new routes”.
There are good routes down at the end of the cliff too, the rock starts to get good again. Eventually the app will include those.
“This project isn’t ever going to end there are always going to be updates,” Fracchia said.
Including all the variations, there are about 100 routes.
Basically everything is the same as in the Trapps App there are detailed base photos and topo photos. Some things that will be different in the new app, the Gunks App team added a little more history, and more information.
They got Russ Clune and others who have climbed all these routes to add a bit of information.
Some routes I’ve had to go back out three and four times to make sure I’ve got it right.
“One feature we’ve added, Fracchia said, “If a lot of people are talking about a route and looking at the app, before if you touched the photo pointing to a hold it would collapse. In the new version the pic only collapses if you hit the X. You can zoom in and say right here is that good hand hold”.
How people are using the app should inform the design, Fracchia feels.
The re-exploration of the cliffs for that apps has led to some new routes.
“As was I working on the App I was going through The Nears with a fine tooth comb I was telling the best climbers, there’s something here that I think will go,” Fracchia said.
The Gunks are seeing a bit of a revival, Fracchia believes.
People might have stopped looking around, assuming everything has been done but there are boulders who are climbing at a higher level.
Ah, bouldering again…
So- lines that may previously remained unclimbed are being given a go.
Gunks Apps
Another change will be the way the App is purchased. Users will download an overall Gunks App for free and then within that application purchase Trapps, or Nears, or in the spring Peter’s Kill, specific components.
“That way users can just go to Gunks Apps and click on whichever cliff they’re at,” Fracchia said.
Instead of the way it functions now which is having to navigate out one app and into the other.
For those who already have the apps, you're grandfathered in, all the updates are included, and you’ll just continue to get everything.